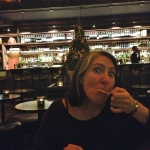 I am still in London with my friend Julia, and we have spent the days/nights since Christmas enjoying more movies and theatre and food! I’m going to have to seriously start dieting soon!! So easy to gain weight when your traveling.

Between Christmas and New Year’s Eve, we went to see the Possible-Impossible House (a children’s show), which was clever but I know several of my friends who would have done a much better job; The Commitments (not as good as the movie); and Woman in Black, the long-running ghost story in the West End. It’s a two-man show that was much better than I expected, and while it wasn’t all that scary it was well acted and staged, and I highly recommend seeing it if you’re in town. 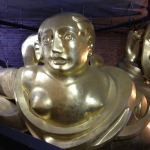 ay-of tickets. Most theatres put these on sale around noon or 3 PM, depends on the theatre, and will sell you a front row seat for just 20 pounds. It’s much cheaper than TKTS or the discount ticket houses you see everywhere. Julia and I just go from theatre to theatre and ask. Whichever one has the best, cheapest seats is our show for the night! Kinda fun to do and you never know what you might see! Also, Time Out London offers a ton of discount seats and other entertainment vouchers that you can buy online, kind of like Groupon.com. Check there as well for discount theatre tickets. There you go, tip of the day!

We also went ice skating at the Natural History Museum. We arrived in the afternoon but there were no available tickets until 6 PM, so we pu 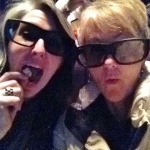 rchased tix for 6 PM and then went to the Science Museum around the corner. The London Science Museum is huge and fascinating! I was blown away by the 3D printer exhibit!! I had no idea such technology even existed. I predict it will change our world drastically. If you can design it on a computer, you can now “print” it on a 3D printer. You can make anything from a bionic arm to a gun to a sculpture of David. Incredible and kind of scary technology.

While there, we also saw the 3D IMAX movie, Stephen Hawkings Hidden Universe, and it was fantastic! I love 3D movies and seeing it on the IMAX screen with spectacular 3D images and sound was the best!! I now know what a crab nebula looks like and can identify 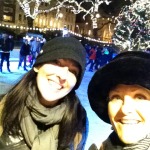 one if I ever see one. Just so you know. And we were now adequately prepared to see The Theory of Everything on New Year’s Day.

After the museum, we returned to the skating rink and got in line to get skates. I was nervous. I’m not an ice skater and have only been maybe three times in my life so I was very anxious about getting on the ice; but I’m happy to report that I did not fall down. I managed not to run in to anyone or embarrass myself at all. It was actually quite fun and skating under all the Christmas lights and the very large tree in the center was beautiful! It was a wonderful night but my legs were sore the next day. Wow, I’m so out of shape. Jeez… and speaking of out of shape…

Julia and I have eaten a ton of Indian food in the past two weeks. I’ve been to the Spice Market twice and the Masala Zone twice. Both are fantastic! The food is really wonderful at both, but Masala Zone is more traditional Indian street food and home cooking. Prices are pretty reasonable as well but as my waist line expands, I’m starting to look for juice bars to start my juice fast!

New Year’s Eve was a huge surprise for me. I’m not a fan of NYE. The only time I’ve ever enjoyed the holiday is when I was singing with The Bouffants. For 20 years, I spent NYE on stage with my band mates where we could enjoy a spectacular party without fighting the crowds. We were paid well doing what we loved and I was on stage with my dear friends. I have many fond memories of NYE past, but now NYE holds nothing for me. It all just seems so forced, like you’re expected to go out and have a f 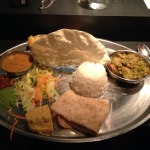 antastic night at the expense of your wallet and a good nights rest. I’m not a fan and quite honestly I was dreading the night.

I decided to spend NYE as I have done in the past, seeing a movie. I went to see a Bollywood film entitled PK and it was wonderful. I love Bollywood movies! It’s the biggest film industry in the world and most American’s don’t even know it exists. Such fun and theatrical movies, so colorful with huge casts and crazy music/dancing. I love it! PK was no exception. It was a movie about what is wrong with all religions and what is right about kindness, goodness and giving to our fellow beings and planet. It was perfect for NYE!

Afterwards, I headed back towards my hotel on Belgrave near the Thames. I chose this little boutique hotel because it was 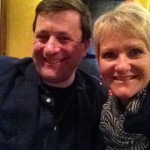 cheap and it is close to the river, so I might have a chance to see the fireworks should I be able to stay up that late. I was a little hungry and as I walked I spotted a little Spanish bistro that was all lit up. I wandered in and found a spot at the bar since all the tables were taken. I was surprised to get a seat at all since it was NYE and it was 8:30 PM. I ordered a few veggie tapas and talked to the couple beside me. They were leaving for a two month holiday the next day and traveling to Singapore, Australia, New Zealand and the outer islands. As we talked, another man came in and we all shifted down so that he could have a seat at the bar. His name was Paul and he and I talked through the night. Around 11:30 pm he asked if I’d like to walk to the river to see the fireworks. I had no idea it was that late!! We walked to one of several bridges that cross the Thames where hundreds of other people were 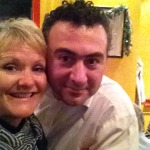 gathered to catch a glimpse of the pyrotechnics. Just before midnight, the entire crowd began counting down and as Big Ben rang in the New Year the fireworks burst into the sky. While we were not in a prime viewing spot, we were able to see some of the fireworks from our perch. Paul walked me back to my hotel and we sat in the bar area and talked a bit longer. It was a surprisingly perfect night! Life is full of surprises sometimes!

I hope you had a wonderful NYE with family and friends. I also hope that 2015 is full of surprises and adventures. I know mine will be!!! Happy 2015 my sweet friends! I wish you joy and contentment in the coming year!! 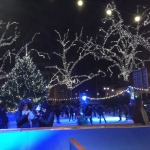 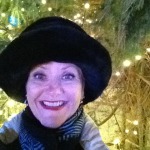 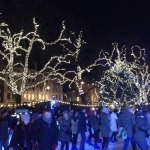 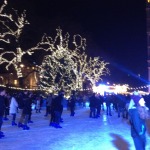