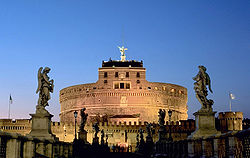 As promised, today’s post is a continuation of our four days in Rome.  You will remember that we toured the Colosseum and the Vatican the first two days, and on day three, we toured the Castel Sant’Angelo and then a walking tour of Rome with Maristella with City Tours.

Castel Sant’Angelo (Castle of the Holy Angel) was once the tallest building in Rome. It was actually built as a mausoleum by the Emperor Hadrian for himself and his family. It was later used by the Popes as a fortress and hiding place for both the Papacy and the treasury. There is a secret underground passage from the Vatican to the castle (well not 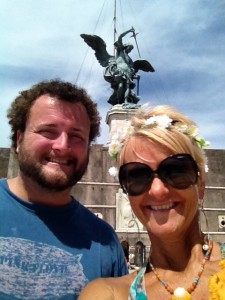 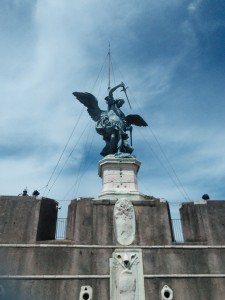 so secret anymore) that they used to go back and forth. The structure was also used as a prison and house of torture during the 14th century. Atop the castle is a huge bronze angel and the castles namesake. Legend holds that the Archangel Michael appeared atop the mausoleum, sheathing his sword as a sign of the end of the plague of 590, thus lending the castle its present name. The views from the top are beautiful – the Tiber river along with St. Peter’s Basilica and Vatican City can be seen.

After seeing Sant’Angelo we had a quick lunch and went to the site of our next tour. We began our tour at the Spanish Steps where she gave us the history behind the steps and the beautiful fountain. Like David and Gigi, our other tour guides, she was very knowledgeable and enthusiastic about “her city.” She happily shared the many facts, myths and behind the scene stories with us along the way. We walked through the city center stopping at fountains, piazzas, and churches of interest. We went to the very famous Trevi 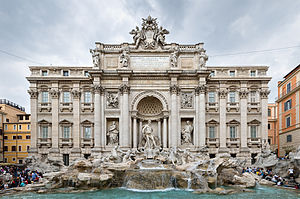 Fountain, one of the most iconic and beautiful fountains in the world and where thousands of tourists come each day to toss a coin into the fountain to ensure their return to Rome. Coins are thrown using the right hand over the left shoulder. This was the theme of 1954’s Three Coins in a Fountain and the Academy Award-winning song by that name that introduced the picture. An estimated 3,000 Euros are thrown into the fountain each day. The money has been used to subsidize a supermarket for Rome’s needy; however, there are regular attempts to steal coins from the fountain, which unfortunately is undergoing major renovations, so we were unable to toss any coins nor get close enough for pictures. The picture here is stolen from Wikipedia.

We walked to Piazza Navona, one of the largest Piazza’s in Rome, if not the largest. It is long and narrow like a long, skinny oval 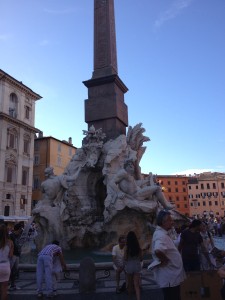 shaped stadium, which is what it once was. It is built on the site of an ancient stadium used for races and games in the 1st century AD. It is now a lively square surrounded by cafes and littered with tourists. At its center is a gorgeous Baroque fountain with an Egyptian obelisk in the center. The Romans favored anything from Egypt especially the obelisks and you see many of them in Rome today. I think the hieroglyphics are just gibberish since the ancient language was not decoded until the 1800’s and these were built many centuries before but they are still magical. When the Catholic Church came to power and the Papacy took over, many thousands of monuments were either destroyed, raped of their resources OR a cross was erected on top to “Christianize” them. This is the case for the obelisk in the center fountain. It survived solely due to the fact that a cross fit nicely on the top.There are actually three fountains in the Piazza, each with it’s own architect, designers, artists 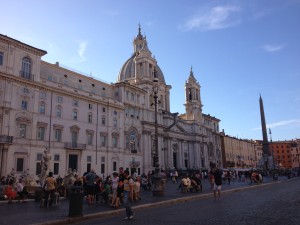 and story. The Piazza hosts theatrical events, farmer’s markets and Christmas markets during the year. It is also home to Sant’ Agnese in Agone, a beautiful Baroque architecture church built on the site where St. Agnes was martyred. It is built in front of Bernini’s Fountain of Four Rivers and while the exterior is not that compelling, the interior is magnificent! The painting on the dome, the frescoes, the alters, the marble floors are all just stunning. The church also houses the skull of St. Agnes herself for those pilgrims who travel thousands of miles to see her.

After Piazza Navona, we walked to one of Rome’s crown jewels, The Pantheon. It is one of the world’s most perfect structures, 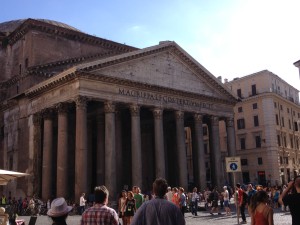 along with the Parthenon in Athens. The Roman Pantheon is the most preserved and influential building of ancient Rome. It is a Roman temple dedicated to all the gods of pagan Rome. As the brick stamps on the side of the building reveal it was built and dedicated between A.D 118 and 125. The Pantheon exists today in such amazing form because the Byzantine emperor Phocas gave it to Pope Boniface the VIII in A.D 608 and it was used as a church ever since. The Pantheon has been in use since the time it was built. After Christianity replaced paganism in Rome, public pagan worship was prohibited in 346 and most pagan temples were closed in 356. Fortunately, a decree of 408 ordered that temples were to be put to new use; thus some have been preserved and were used as secular buildings.It remains one of the most copied and imitated ancient works in the world. Where it stands was not chosen by chance, but is a legendary place in the city’s history. According to Roman legend, it is the place where the founder of Rome, Romulus, at his death was seized by an eagle and taken off into the skies with the Gods. Until the 20th century, the Pantheon was the largest concrete structure in the world. Michelangelo studied its great dome before starting work on the dome of St. Peter’s Basilica. Almost two thousand years after it was built, the Pantheon’s dome is still the world’s largest unreinforced concrete dome. It is truly breathtaking!

We were treated to Gelato in the Piazza (I had iced coffee) by our tour guide and we then we moved on. She talked so much about the city and told us so many hidden meanings and stories. It was a lovely afternoon! We ended our tour back at the Spanish Steps so Ty and I found an outdoor cafe near the Piazza for dinner and continued walking through the city that evening. Everything changes at night; its so much more enchanting and magical under the moonlight. I always love exploring a city at night.

The next day, our last day in Rome, we went to Piazza Venezia. The piazza is a major circus  and the central hub of Rome in which many thoroughfares intersect. The one landmark dominating Piazza Venezia is Il Vittoriano, a monument dedicated to King Victor Emmanuel II, the first king of Italy. The construction of the immense white marble monument – built on the side of the Capitoline Hill – in the early 20th century completely changed the

appearance of the square, which at the same time was drastically enlarged. It is also home to the tomb of the unknown soldier and a museum. It’s one of the most spectacular and largest buildings in Rome with two huge, bigger than life size, chariots with horses on top. The views from the top are spectacular and worth the visit up!

We continued walking around the Roman Forum and ruins and made our way back towards the Colosseum for lunch. We returned to Coming Out, the gay bar where we had lunch our first day, for lunch. It was again very good and the conversations lively! We returned to the hotel to pick up our luggage and sadly head to the airport. We decided to bit the bullet and pay for a taxi since we were both tired and I had sprained my ankle the previous day on the walking tour. So we took a taxi to the airport and said our goodbyes to Roma. Each time I return to this city I fall more in love, so like a great love, I know I will return.

Ciao Roma until we meet again! 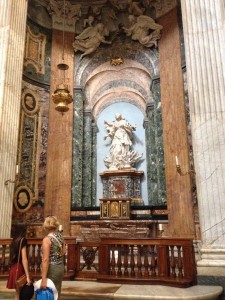 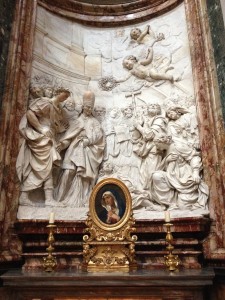 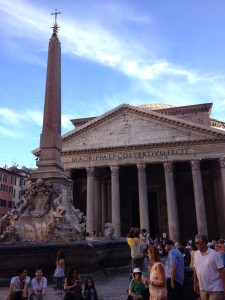 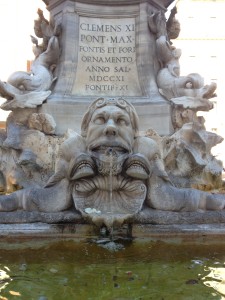 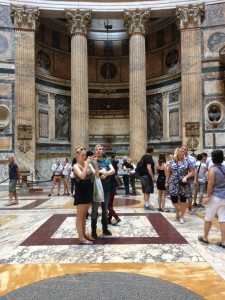 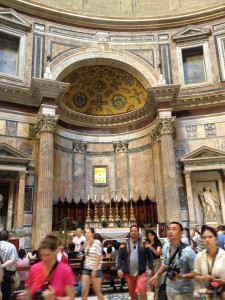 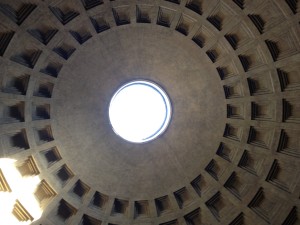 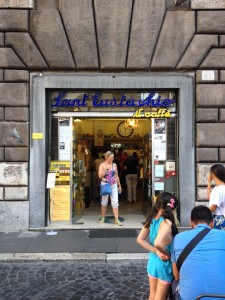 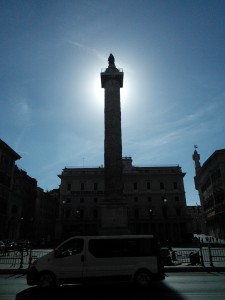 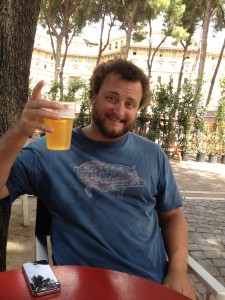