I have fallen in love. Yes, it’s official. I’m in love with London. Even with the on and off rain showers, even with the cold, I loved it. It’s like NYC but not as congested, and it’s cleaner and friendlier. Seriously, Londoner’s are super friendly and amazing folks! I met so many wonderful people! 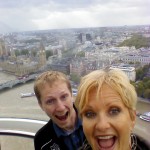 Me and Kevin in the Eye with Parliament and Big Ben in the background.

I met my friend Kevin, who I worked with at the bank in Hawaii, in London on October 9th and we stayed through Oct 14th. My friend Julia from Memphis just moved there for school, so we hooked up with her as well over the weekend. On top of London being a grand city to visit, I was reunited with two friends so the trip was even more special.

I arrived at Stansted airport early morning on October 9th and when I arrived I was giddy with all the English posters and signage! I was so happy to be able to read everything!!! I took the Stansted Express train from the airport to Liverpool Station where I transferred to the London Underground. I had pre-booked my round trip tickets from Stansted to the city so I didn’t have to wait in the ticket line. Also, with your round trip ticket, you have access to a ton of 2-for-1 vouchers that you can use around the city. It saved us a ton of money on our trip, so check it out at: https://www.stanstedexpress.com/offers/2for1

I also purchased a Visitor’s Oyster Card at the airport that was preloaded with 20£. It also saves you a lot of money 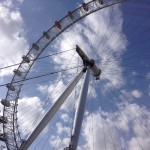 on the Underground single fares. Underground stations are way crowded so it was much easier to do this at the airport than at the very busy, over crowded station.

I met my buddy Kevin at the Travel Lodge hotel in Covent Garden. We got a super cheap deal on the hotel and it’s in a great location in the center of the city. They do not allow check in before noon though nor do they have left luggage room, so we opted to have brunch near by until we could check in. Once we checked in our room and dumped our luggage, we walked to the London Eye just on the Thames River. 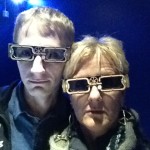 We had pre-purchased our tickets, so again we didn’t have to wait in line (highly recommend), queued up and hopped on. The Eye is very expensive but it does offer great views of the city. But for $30, I would probably not do it again; once is definitely enough. After the Eye, we enjoyed the free 4D London Eye experience film. It was a fun 4D short film that featured an overview of the city with a lot of birds flying in your face. It was pretty cool actually.

Next stop was the London Dungeon. We had a 2 for 1 voucher for this one, so we saved some pounds (highly recommend) and didn’t have to wait in line. The Dungeon is kinda like the Pirates of the Caribbean ride at Disney with lots of costumed folks along the way to scare you, make you laugh, and lead you through the attraction. You do learn a little history, but it’s mostly for kids and families I think. It was fun in a cheesy sort of way. It’s a 90 minute tour, so longer than any Disney ride for sure, and it ends with a free fall in the dark (think Tower of Terror) that is fun! 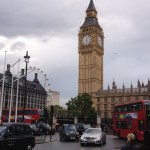 Clock Tower at Parliament – nope it’s not called Big Ben. The bell inside is Big Ben.

After the Dungeon, we walked across the bridge to Parliament and Big Ben. Actually, the tower is not Big Ben; the bell inside is Big Ben. The tower is, well, just the clock tower at Parliament; but it’s come to be known as Big Ben. We strolled to Westminster Abbey where we attended a 5 PM prayer service. The choir singing in that historic place, their voices magically filling the beautiful halls, was enchanting. We were not allowed to tour but listening to the service and the chorale singing was wonderful. They were honoring  the Ugandan people that evening and there were many Ugandan visitors there as well as tourists from around the world. It was pretty cool!

That night, we went to Sarastro’s for dinner. We passed it earlier in the day and went inside to have a look because the outside garden was so beautiful. Inside, it looked like a set for Moulin Rouge or as I told Kevin, looks like Moulin Rouge threw up in here! It was something out of Arabian Nights and a 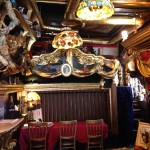 genie bottle and Moulin Rouge and a drag queen dream! It was crazy and so we made a reservation for that night! We were not disappointed. The menu was a set price and the food was middle eastern with mezza plates for the table – hummus, tabbouleh, grilled aubergine and tomatoes, mushroom pies – with bread and olives too! It was a huge amount of food. The staff was awesome and around 8 PM, a jazz singer started cranking out the tunes. He sang everything from Frank Sinatra to Lena Horne. He was terrific! We had such a great night, but I could tell my dinner date was fading. He had been traveling for over 24 hours and it was time to sleep. We headed back to the hotel around 10 PM for a well-deserved rest.

Next morning, we were up bright and early for our 10 AM Changing of the Guard tour with Matt at Fun London Tours. It was a gorgeous day with lots of sunshine!!! Julia met us for the tour as well, so it was an extra sunshiny day!!! I’ve known Julia since she was about 5 years old and it was wonderful to see her in London.

Fun London Tours offers a Changing of the Guard walking tour for only 15£ (that’s cheap) and Matt takes you behind the scenes where you get the most action. Standing in front of Buckingham Palace and watching the two sets of guards (old and new) stare at 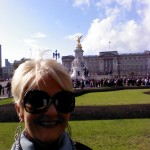 each other for 30 minutes seems like a big waste of time to me, so we booked the tour to see the real action. Additionally, Matt gave us a lot of history of the palace and the changing of the guard. We waited on Pall Mall for the security forces to come from Buckingham to St. James. The white horse in the front of the procession meant that the Queen was in the Palace, which according to Matt was a rare and wonderful thing! We would get to see even more on our tour. We then ran over to St. James Palace where William and Kate and the baby live and watched as the “old guard” prepared to march. Each guard “shift” has their own marching band and special uniforms – there’s a lot of pomp and flare involved! We then ran down Pall Mall following the “old” guard regiment and marching band to another location where we watched the “new” guard, members of the British Air Force, march out with their marching band towards Buckingham Palace. The two processionals meet at Buckingham Palace for the big swap. We then ran over to Buckingham Palace for some photo ops. You can’t get close to the guards at Buckingham, all you can do is stand far outside and watch the two guard groups come together and stare at each other, but we were able to see all the pre-staring stuff! 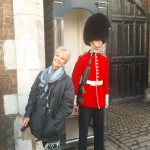 St. James Palace backdoor where we could get close to the guards.

And because the Queen was “in” Matt took us around back of St. James Palace where there are two guards who stand guard at the back entrance when the Queen is in. That’s where we were able to see the changing of the guard from just a couple of feet away and take pictures!! Well done Matt!!

We grabbed a quick lunch, walked through Green Park and headed toward the Tower of London. Contrary to what I thought, the Tower of London is not just a tower, it’s a huge fortress that has been used for many different things over the centuries. It has been a home for royalty, a prison, a torture chamber and execution site. It now houses approx. 50 Beefeaters, The Yeomen Warders of Her 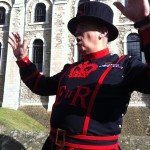 Majesty’s Royal Palace and Fortress the Tower of London, and Members of the Sovereign’s Body Guard of the Yeoman Guard Extraordinary, popularly known as the Beefeaters, are ceremonial guardians of the Tower of London. However, the name Beefeater is more likely to have originated from the time when the Yeomen Warders at the Tower were paid part of their salary with chunks of beef. This took place right up until the 1800s. It’s an impressive site and took the rest of the day to tour. Our tour guide was funny and informative as he guided us through most of the site. Views of the Tower Bridge and the Thames were a bonus! 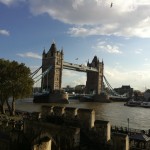 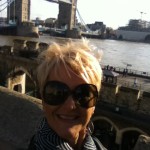 That night, we saw Here Lies Love at the National Theatre. It’s a new musical about Imelda Marcos and it’s amazing! The set is something out of Studio 54 with a big disco ball, smoke, mirrors, loud music and strobe lights. The set pieces are big tables on wheels that move around. Stage personnel in fluorescent pink jumpsuits are in the room to move the crowd as the set pieces move. It’s a wild night and audience participation, i.e. dancing, is highly encouraged. The audience is moved around the room so you are never standing in the same place. Oh, yeah, we were in the pit so it’s standing only for 90 minutes. Seats were higher above and on three sides of the pit area. The music is wonderful, everything from disco to reggae to love songs. It was non-stop action and fun!

After the show, we went our separate ways. Julia lives about an hour outside the city so she had a ways to go. Kevin and I walked back across the Thames and into the city towards our hotel. 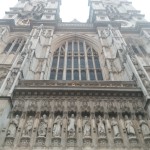