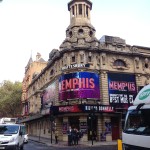 Saturday morning Kevin and I agreed to get tix to a matinee. We had no idea which one, so we chose one close by – Memphis the Musical. Despite it being about my hometown, I had never seen it, so it was a good choice for me. We went to the theatre at 10 AM when “day of” tix go on sale. We were able to score front row seats for just 20£ each!! The show was to start at 2:30, so we hopped on the tube towards St. Paul’s cathedral to tour the church.

population. Important services held at St Paul’s have included the funerals of Lord Nelson, the Duke of Wellington, Sir Winston Churchill and Margaret Thatcher;  Jubilee celebrations for Queen Victoria; peace services marking the end of the First and Second World Wars; the wedding of Prince Charles and Lady Diana, the launch of the Festival of Britain and the thanksgiving services for the Golden Jubilee, the 80th Birthday and the Diamond Jubilee of Elizabeth II. St Paul’s Cathedral is a busy working church, with hourly prayer and daily services. We purchased an audio guided tour and spent about 2 hours walking through the cathedral and up the 300+ steps to the very top of the dome. It was a wonderful visit and I 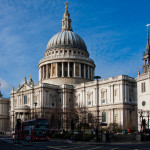 remain very impressed with the diverse outreach of the church. St. Paul’s hosts diverse and controversial art works, services, and even fundraisers for groups not usually supported by any church. They recognize world HIV day, LGBT day, and other equal and civil rights organizations. St. Paul’s is where MLK, Jr. accepted his Nobel Prize. The list goes on and on and is quite impressive, not to mention that the structure itself is beautiful and overwhelming.

After our tour, we went for lunch in a fun Mexican restaurant close by. The food was yummy and there was free wifi and soon we became engrossed and all of a sudden it was 2:16!! Remember our show was to start at 2:30 and the theatre was not near by. We paid very hurriedly and literally ran toward the tube station. We managed to arrive at 2:35 and were asked to wait until the next break and to take seats near the back so as not to disturb oth 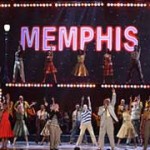 ers. Our new seats turned out to be quite good actually and we stayed there for the entire performance as our front row seats turned out to be too close for comfort. Lucky!! The show was outstanding!! I can’t say enough about the singers. The woman who plays Felicia, Beverly Knight, is considered the “Queen of British soul” and I can see or rather hear why! She was amazing! She has the voice I can only dream of ever having. She reminded me of Whitney Houston and I later learned that she is playing Rachel Marron in the stage production of The Bodyguard, the role that Whitney Houston played in the movie. She blew me away; and the rest of the cast didn’t suck either! It was outstanding and the audience showed their appreciation the entire show. The show just opened in London, and I’m sure will do very well judging by the audience reactions.

We met Julia after the show in a trendy shopping area. By this time, my boots were done and my feet were killing me. I was beyond done; I had to have new boots. I zipped in the FLY London shoe store and after trying on several pair, bought a pair of black boots that I love and are so comfortable, but I paid WAY TOO MUCH for. Don’t even ask. It’s more than I’ve ever paid for a pair of shoes or boots in my life, but I was desperate.  After coffee and my boot purchase we began to hunt for a place for dinner. Since we were in the theatre district and it was Saturday night, everything was booked so we ended up at Byron’s for a “proper hamburger” (say this in your snootiest British accent). Actually, the restaurant was far from snooty – the food was quite good and the staff were wonderful. When waiting for a table, I turned to the man at the front desk and said, “May I ask you a question? Do you like my boots? I just paid way too money for them and I need some external validation.” I said this with all seriousness and he went on and on about how great my boots were. When we were seated, the first thing our waiter said was, “oh, I love your boots?” I stood and modeled them so he could have a proper look. The next staff person that came by said the same thing. Apparently the gent in front had told all the staff to come by and admire my boots. By the time we left, everyone said something to me about my boots! It was so sweet and I thanked them all profusely for making me feel better. Now you see why I’m in love with London. The people were just lovely.

After dinner, we went to The Cellar Door for what we thought was a drag show. Turned out to be a drag DJ and a one-woman burlesque show in what has to be the tiniest bar in Europe. It’s actually underneath the sidewalk in what used to be a basement of some sort, hence the name. It barely holds 25 people, tops. We kept thinking there was more behind the curtains and mirrors, but no, there wasn’t. At 9 PM, our drag hostess and DJ appeared from behind a curtained off corner and began to spin tunes and cut people to shreds with her biting humor. She was hysterically funny but to avoid any overly harsh American barbs directed as us, I told her she had awesome, Tina Turner legs. Well, that won her over and we escaped her commentary for the night. Others were not so fortunate! We danced until 1 AM and closed the place down! Two queens picked me up and waltzed me thru the space on the last number. It was an awesome night!

Julia left around 12:30 to catch the last train out, and Kevin and I walked back to our hotel after 1 AM happily falling into our bed grateful to be off our feet. Even in my fab new comfortable boots, my feet were hurting! I fell asleep rubbing my tired toes and wishing I could sing like Beverly Knight. Only in my dreams…