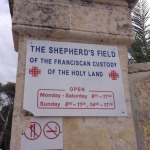 It’s Tuesday, December 9th, and today I have a half day tour to Bethlehem and afterwards, I am going with Helen to Yad Vashem the Holocaust Memorial. Bethlehem is in the West Bank and is at this time controlled by the Palestinians. Strange that the Holy Grail of Christians would be controlled by either the Muslims or the Jews. 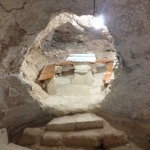 tinian guide Issa, which means Jesus in Arabic. He offers us an overview of the stops we are going to make and tells us the “Jesus and Bethlehem is for everybody, not just Palestinians, not just for Jews, not just for Christians. There only one Jesus and He for everybody.” I liked him immediately. 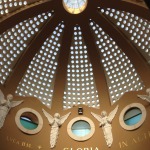 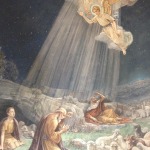 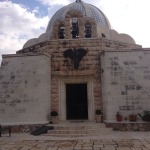 Next we went to the place where Jesus was born. The site of the birth was not in a barn but in a cave which is n 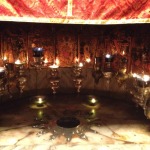 ow covered by not one but three churches that are all connected (sort of) together. There is the Catholic church, the Greek Orthodox church and the Armenian church, and all lay claim to the holy site; but it’s under the Greek Orthodox church where you can go downstairs and touch THE spot where Jesus was born. Pilgrims come from all over the world, especially at Christmas to kneel, pray and kiss the holy spot.

We walked through each of the churches before exiting to Bethlehem Square where Christmas was full on. There is a huge Christmas Tree, Nativity scene and a large stage set up for concerts. The square is decorated with 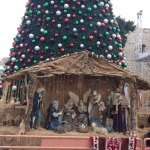 lights and seasonal music was playing even as the Muslim mosque next door called for prayer. Again, this entire country/region seems to be always in opposition; but in many ways there is a unique harmony. Issa kept repeating his mantra, “Jesus is for everybody,” throughout our tour. He also said there is only one God and God is for everybody, Muslims, Jews, Christians, etc. Again, I liked him a lot. He also asked us to go back and tell all our friends that Bethlehem is safe and to come visit. He stated that tourism was so low that shops were having to close and people were not working. It was good to hear from and talk to just a regular working guy in this country. In fact, all our guides were like this. They are just trying to make a living and do what they love amongst all the conflict and fighting.

Issa took us to the Milk Grotto which is where Mary, Joseph and Jesus stayed when they returned from Egypt. Supposedly, 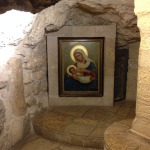 one drop of breast milk from Mary turned the grotto’s stone from black to a beautiful, creamy white. There is a church built over the grotto, so we walked through the church and then down stairs into the grotto where a small chapel is set up.

On the way out of the city, we stopped along side a very large graffiti wall that was covered with Palestinian art that largely called for peace. It was refreshing and a good way to end the tour. Bethlehem was not one of my favorite spots but I’m happy I saw it.

We returned to the hostel and I ran around the corner to the falafel shop (think Subway) and got a falafel wrap with everything! So GOOD! I found Helen and we took the train out to Yad Vashem memorial. 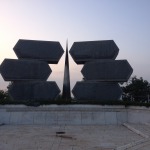 Yad Vashem was established in 1953, as the world center for documentation, research, education and commemoration of the Holocaust or Shoah. In 1993, Yad Vashem established the International Institute for Holocaust Research that works with people all over the world on Holocaust research and scholarly projects. It offers financial and academic support for scholars and students of the Shoah; offering MA, PhD and postdoctoral fellowships; and publishing academic research, documentation, conference anthologies, diaries, memoirs, and albums about the Shoah. Here you can also find the central database for all victims of the Shoah as well as the world’s most comprehensive documents archive.

Like all holocaust memorials, Yad Vashem is sobering. It is beautiful and tragic, uplifting and depressing. The building itself is unique in shape. It is long and triangular so it looks like a triangular tube of sorts. In the middle of the “tube” is a long 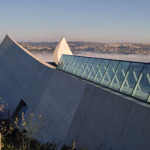 The rooms take you from Hitler’s rise to power to the Final Solution. It is filled with personal accounts, video, letters, pictures from both survivors and non-survivors. Like Anne Frank’s diary, viewers are offered a very personal glimpse into everyday life in the ghettos and camps. I was holding up pretty well until I read a poem written by a 14 year old boy in one of the camps. It started like this: “One day when I am twenty, I will travel plenty. I will see the world…”  I couldn’t read anything after that. I found a corner, sat down and wept. I sobbed without control. I couldn’t stop. The boy did not see the world or 20 years old. He died in the camp. It was a gut punch, and even as I type this, I have tears in my eyes. That boy’s poem spoke to me so profoundly. I can’t explain it. There was MUCH within the museum to cry over, but his poem was so sweet and tender and optimistic that it broke my heart.

At the end of the museum, is the Hall of Names. It is the memorial to each Jew murdered in the Holocaust – a

place where they are commemorated for generations to come, where each name is written and kept in thousands of books that line the bookshelves around the cone shaped room. The researchers at Yad Vashem have worked tirelessly since 1953 to capture every single name, every document, every letter, every painting and every poem so that the 6 million Jews who died in the Holocaust would be remembered forever.

As you walk out of the Hall of Names, you once again see the light at the end of the tunnel, both literally and figuratively. Walking through the glass doors onto the balcony that overlooks a beautiful tree lined valley brings instant peace. The architect/artist’s design is perfect. Outside the museum, the grounds are also memorials with various sculptures and memorial stones. I noticed a recreation of the sculpture 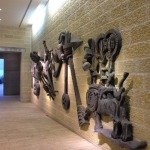 from Dachau concentration camp that I so loved. There are two art museums on the site that house the largest collection of Jewish art from the Holocaust period and serves as yet another tribute to the victims of the Shoah. 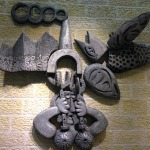 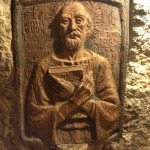 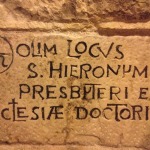 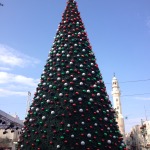