My Ashram Experience in India – Week 2

It’s my second week at the Ayurveda Healing Ashram in Trivandrum, Kerala, India. After a week, Christina and Mark left for Varkala beach, which left just me, Elizabeth and Lisa starting week 2. I really enjoyed meeting Christina and Mark. She is an attorney who works for the Public Defenders office and Mark is a landscape designer. He could often be found exploring the herb garden or watering the plants. They’ve been together since they were 18 years old and seem to have the very special relationship that I can only dream of having. I hope to make it to Portland one day and look them up. 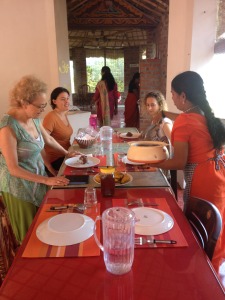 After Christina and Mark left, a woman named Judy joined us. Judy is from the Bay Area and is 64 years old. She’s a singer and an enthusiast about everything including yoga, India, and traveling. She had been traveling with a group (Rhodes Educational Tours) through India for three weeks and she spent a week at the ashram and then went to a yoga ashram for another week before returning to the States.  Also during week 2, we were joined by an Indian couple, Arun and Angelic, from Varanasi India in the north. They were so open and honest about their country and really tried to inform us about the culture and the differences between the north and the south. They have two daughters, one who is attending the University of Toronto and another who is in her final year in school and will also be going to Toronto. They plan to retire one day in Canada to escape the corruption of India. Arun is a business-man and he told us so many stories of corruption in government. It was really very sad to hear. I could tell that they love their country and culture but they are both disillusioned by government corruption that they want to leave and join their daughters in Canada. They seemed to be a very progressive couple and we learned a great deal from them during their week stay. While they did some of the treatments, they were essentially there to relax and see the countryside.

The schedule and routine was pretty much the same as week 1, but after five days of sleepless nights, Dr. Shanavas prescribed a soothing, cooling milk 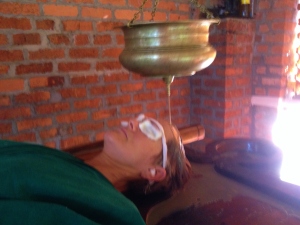 dhara to help me sleep. The milk dhara did seem to help me sleep, and it was so refreshing during the warm, humid afternoons. A mixture of cold curd or butter milk with powders and herbs is slowly poured over your forehead in a slow, sweeping back and forth motion that induces relaxation and sometime a trance. It’s like someone scratching your head slowly and softly until you doze off. It was one of my favorite treatments! The cold dhara, the smell of incense and rose water, and my music playing was wonderful.

Also, after five days, the nasym treatments ended, so for week 2, I received milk dhara, my back treatment and a different type of massage – Kizhi massage. Medicated herbs and Ayruvedic powders, along with garlic and lemon are put inside a cheesecloth pouch and tied with string. The pouches are then heated in a pan of medicated oil and are used to “massage” the patient. Basically, your body gets pounded and then rubbed like a Thanksgiving turkey. The massage is supposed to be anti-inflammatory and good for nearly everything. It was rough and we had to have another discussion about brute force and the difference between HOT and WARM. Those ladies are strong!! When I was finished, I smelled like garlic chicken ready for the oven! Plus the turmeric turned me a pale shade of yellow! I was told to again rest for an hour and then take a hot shower. The hot shower couldn’t come soon enough!

Morning yoga continued from 7-9 AM and everyday I seemed to get stronger. I was really out of shape that first week, and my hamstrings were even 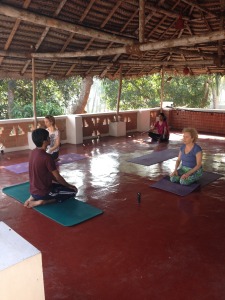 tighter then before which I didn’t think was possible. But by week two, I was able to not only touch my toes and put my head to my knees, I was doing a decent headstand. I was even enjoying the chanting. I found just the right note or frequency that made my whole body vibrate and I could feel the energy flowing through me.

I was also enjoying the evening chanting and meditation, although I’m still not good at it. But it’s hard when you’re hungry, the mosquitoes are biting you, you don’t know the Sanskrit words in the mantra AND you get tickled because everyone is saying something different. Raviji chanted with us one night, and he tried to “teach” us to meditate. He instructed us in breathing, posture and the purpose of Om chanting. Then, he taught us our first mantra and we chanted it loudly 108 times followed by slowly repeating it 3 times. Raviji kept saying, “louder and keep up!” After that, Sam led us for a few nights and his style was different. He was slower and more relaxing. Lekshmi also led chanting and she did what we called “speed chanting.” We couldn’t really understand what she was saying and she chanted really, really fast. That’s the nights we all got really tickled!

One afternoon, Elizabeth and I hired a tuk tuk and went to Kovalam Beach just 2 km away. The beach was nice and not too dirty or crowded. It was warm and breezy so we walked along the boardwalk and shopped. We only had a couple of hours, so we did some shopping, had a coconut water and attempted to walk up to the lighthouse, but after getting halfway up the steps, we both decided we were too exhausted. Detoxing can be hard on the body and we were both feeling the exhaustion and heat. I bought a pair of colorful, gauze pants for 250 Rs (less than $5). This time of year is low season so shop owners are eager and willing to barter. The price started at 350 and I countered at 250. He said 300 and I said, ok, 200. As always, it took the shop owner a minute to figure out I had just offered him a lower price that where I started. It’s a proven technique I use – every time the owner counter offers, I go lower, and then usually end up back at the first price I offered him. We settled on 250, which was

my original offer; but he got a laugh out of my bartering.

Once again, our little two hour excursion left me completely exhausted. I read in my room until Dr. Shanavas came by around 6 PM. While at the ashram, I read A Prayer for Owen Meany by John Irving. I love that book. It makes me weep and laugh and want more. I highly recommend it to anyone who wants a good read. I also brought The Art of Happiness by the Dali Lama, The Alchemist by Paulo Coelho, and A New Earth, Finding Your Life’s Purpose by Eckhart Tolle. Again, all highly recommended reading.

Sometimes in the afternoon I would go to the kitchen and watch Beena and Sarita cook. Since coconuts are so plentiful, grated coconut and the milk is used in almost everyt 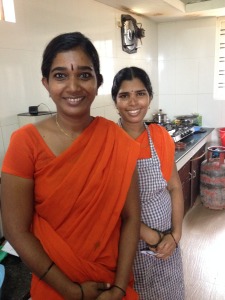 hing. I watched Beena gather coconuts from the grounds and take them out back to open. She uses a 3 foot iron pointed spike with a side handle which opens the spike like a lever to split the coconut. She would pound the coconut onto the spike, pull the lever and the outer shell would crack open and she peeled it off. She continued this until the outer shell was removed and she was left with the small round coconut we are used to seeing at the store. To remove the hard brown shell, she simply banged it with a knife until it cracked and she was able to crack it in half. To grate the coconut, she used a serrated shoe horn looking thing that was attached to a board. She would sit on the boar 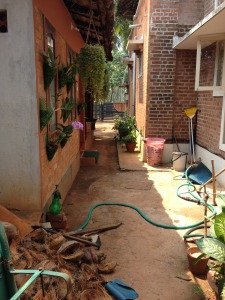 d and then rotate the coconut half against the serrated tool and pile the roughly grated meat into a pan. It was simply and effective and fascinating. Food at the ashram was simple and healthy. They used lots of coconut, green bananas, potatoes, peas, cucumber, carrots, rice and spices. Instead of curry powder, they use curry leaves, whole cinnamon, whole cloves and nutmeg and fresh ginger and garlic. One of my favorite things they cooked was the Ragi dosa. Ragi is red African millet and they use it to make pancakes, porridge and steam cakes. It is very healthy with tons of calcium and I fell in love with it. I hope I can find it back in the US. So much better than regular pearl millet. My time in the kitchen was wonderful. I loved the smells and tastes and the random conversations. Beena and Sarita were so lovely and sweet to me. Their company and the food were one of the highlights of my three weeks at the ashram!!

I hope you have a day full of tasty food and sweet company! Check back tomorrow for another post on my final week at the ashram and be sure to look at all the pix under the Photos tab above. 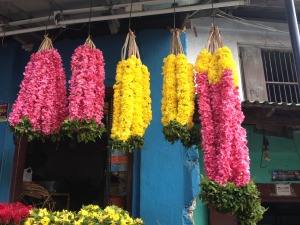