Week 3 at the Ashram

It’s week three at the Ayurveda Healing Ashram! WOOHOO! Last week, Elizabeth left the ashram heading for Varkala beach. She promised to send me pix from Varkala and let me know about the beach, accommodations and restaurants. I wanted to spend my last four days at the beach, either Kovalam or Varkala so Elizabeth promised me a scouting report from Varkala. She had been at the ashram three weeks and had also done the Panchkarma cleanse. 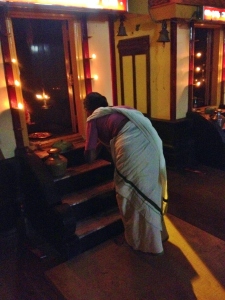 Like me she was feeling the effects of the detox but had yet to start feeling mo betta. You feel worse before you feel better I guess.

With Elizabeth gone, it was me, Lisa, Judy and Arun and Angelic. We continued our daily routine of morning yoga, breakfast, treatments, rest, lunch, treatments, reading, doctor consult, chanting and dinner; but my final week, my treatments changed. The garlic chicken massage, cool milk dhara and back treatments ended and I started the final phase of the cleanse – warm oil dhara, an oil bath and… vasti, or medicated enema. All treatments prior to this week were designed to loosen the toxins, increase circulation and energize my chi. The enema pulls the toxins out while the oil bath and dhara treatments are for relaxation and rejuvenation. I’ve done enemas in the past, so I wasn’t too worried; in fact I was ready!

The oil dhara is just like the milk dhara except the oil is warm instead of cold. It is equally 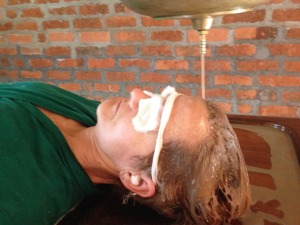 as relaxing. For the oil bath, I lay naked on the wood table while Sheena and Lekshmi repeatedly poured warm medicated oil all over my body. It feels like warm milk chocolate being poured slowly over your body. It was very sensual and relaxing. So far so good. The enema that I received for five days consisted of milk curd, medicated oil, honey and ayurveda herbal powders. It was a thick mixture but it did not give me any problems. It was quick and painless and seemed to induce the desired effects. 🙂

I continued my afternoon visits to the kitchen to talk with Beena and Sharita and watch them prepare meals. I loved sitting there watching them and tasting all the samples they gave me. I really enjoyed all the food at the ashram. It was one of the highlights of my three weeks. I even lost a few pounds! 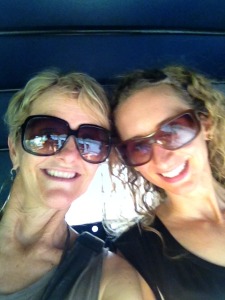 As Lisa prepared to leave, she and I went into Kovalam so she could do some shopping before returning home. We hired a tuk tuk and ventured to the beach. I bought a bed cover and a child’s sari for Beri. She’s the niece of my sweet friend Tam Tam and I adore her. She’s such a sweet child and I know she will love her new blue sari! I bought a few other things for people as well. I really didn’t buy much anywhere. I don’t want to have to pack it and ship it home, so gifts will be few when I return to the US. Lisa and I had a wild ride back to the ashram! We laughed the entire time. Driving in India is a perilous sport at best!! See my next post on driving in India!! 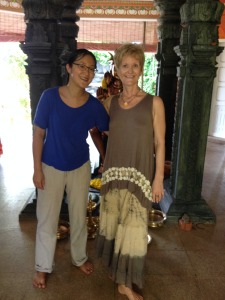 That week, Lisa, Judy, Arun and Angelic left the ashram but fresh faces arrived as they left: Fiona from Australia, Sara also from Australia but living in London, and Laure from France. They arrived on Thursday so I only spent a couple of days with them. As I watched them trying to adjust to the very relaxed, never according to schedule life at the ashram, I was reminded of my first week and how long it took me to adjust. I kept telling them to give it a few days, that things would get better quickly. Between the jet lag, the hard mattress, the lack of caffeine, a new place, new faces, massages that can leave bruises and questions that are never really answered, it can be a very difficult adjustment. Both Sara and Fiona looked ready to bolt after the first night. I tried to reassure them it would get better but they looked doubtful. 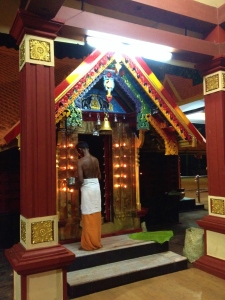 Friday night, I invited Sara, Fiona and Laure to go to the temple for the evening pooja. I had been listening to the temple drumming, chanting and music for weeks and everytime I asked what the music and drumming was for, Lekshmi would say, “special pooja.” So my last night, I wanted to see the special pooja. After an early dinner, me, Sara and Fiona piled in a tuk tuk and headed for the temple which was about a half mile away. There were not many people there. With all the loud music and chanting, I thought the place would be packed, but there were very few people there. We were of course the only white faces there but the temple-goers were extremely kind and helpful. The pointed and pulled us to the appropriate viewing spots to see the offerings being made to 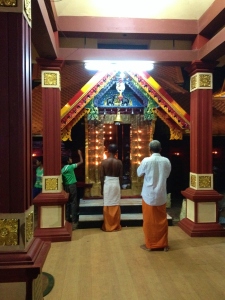 their respective gods. They clearly wanted to share the experience with us and wanted us to see everything. As we walked around, people pointed and smiled and waved. Kids came over to talk to us and show off their English speaking skills. Once again, everyone was kind and generous and welcoming! It was a fun night.

With Elizabeth’s feedback, I had decided to go to Varkala beach for my last few days in India. On Saturday, March 28, I enjoyed my final breakfast. At my request, Beena and Sharita made me ragi steam cakes with honey and banana. It was wonderful!!! I enjoyed a green tea and fresh fruit as well. I made my rounds to all the staff and thanked them for their kindness. During my 3 weeks there, we learned that Agita and Sam were going to have a baby! They got married back in September and just learned that she is pregnant. She had been off sick for two weeks, but had written me a lovely note in English and sent it with Sam to give to me before I left. Sam was a kind, caring therapist and gave me several of the best head and neck massages ever! Before leaving, I gave them some seed money for a new camera. They are going to need it when that baby arrives!!!

I went to the kitchen one final time and offered my thanks to the both Beena and Sharita. I hu 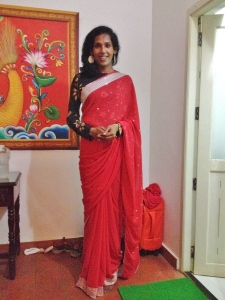 gged Anisha and gave him a pair of earrings and matching nail polish to go with the red sari he modeled for me. He’s going to make a very stunning woman one day. Anisha arranged for a tuk tuk to drive me to Varkala which is about 40 km north, and as I drove off waving at Sam and Anisha, I thought, wow, it’s almost over. My one year adventure is almost over. India nor the ashram was not originally part of my plan, but I’m happy I went. I met so many great people and visited a 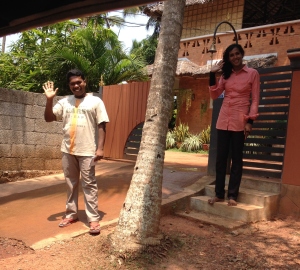 culture I never thought I would see.

But it’s not quite over yet! Check back for my posts on Varkala beach and driving through India! Namaste Y’all! 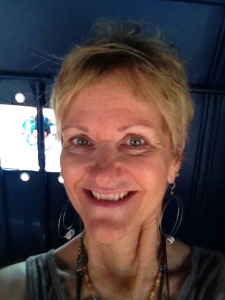