While I was somewhat isolated at the ashram, I did manage to escape a few times for an excursion to Trivandum and Koval 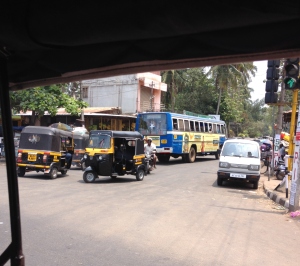 am or just a walk to the village. These experiences plus my two hour tuk tuk drive to Varkala prompt me to write a post specifically on driving in India, which I can only describe as barely contained chaos. I read somewhere that there are over 300 Hindu gods and now I know why. It would take that many gods to oversee and protect the drivers, pedestrians, cows, goats and tourists that dare to navigate the mele.

First of all there are no rules. All road markings, e.g. crosswalks and dividing lines, signs and traffic signals are more or less general guidelines to be mostly ignored. Honking your horn and passing other cars while driving into oncoming traffic is mandatory. In fact, it’s sport. Below are some of my observations.

I swear, it was something out of movie and has to be experienced to be believed. But all that said, I made it safely and never witnessed an accident. While it may seem like insanity and chaos to tourists, it’s everyday life to the locals and to be embraced.

I hope your day is tranquil and peaceful, unlike Indian traffic!! Namaste.