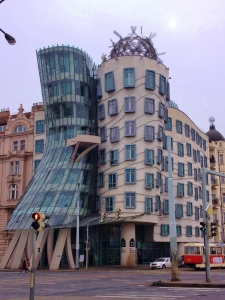 My last day in Prague was spent largely wandering around with a few surprises thrown in. After another large breakfast at the Royal Court Hotel, I walked towards the river to see the “Dancing House,” a somewhat innovative building/gallery/restaurant that seems to resemble two people dancing. It’s nicknamed Fred and Ginger and inside the lobby there is a pic of Fred and Ginger dancing with that great quote: “Remember, Ginger did everything Fred did only backwards and in heels.”  I love that quote!!

Afterwards, I walked across the river towards Petrin Hill, the highest point in Prague, which has a funicular to the top, a large park for walking, and a 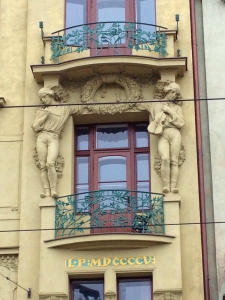 miniature Eiffel Tower with a restaurant and observation deck. I was going to take a ride to the top but it was cloudy and overcast, so I decided just to keep walking along the edge of the park and enjoying the Art Nouveau architecture. Prague is known for its historic architecture, having been the capital of the Holy Roman Empire during the 14th century and one of Europe’s important cities for centuries. However, the range of architecture from the 20th century reflects Prague’s position as a center of art and style, especially the early years from about 1895-1915. The city contains fine examples of both Art Nouveau and Cubism. During our walking tour, I commented to Kathleen, a young girl I met, that the city reminded me a lot of Barcelona due to the architecture. So many beautiful examples are throughout the city including the main train station, 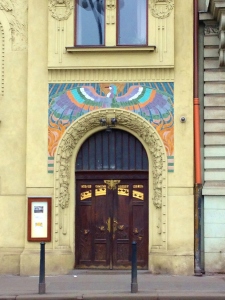 which I was fortunate enough to see when we went to Kutna Hora.

Along the way, I saw a vegetarian/vegan restaurant, so I popped in for a quick lunch. Afterwards, I continue walking through the city taking pictures and enjoying my leisure day.I found another Thai massage place and so I made a quick decision to get a foot massage. I walked into a tranquil, lovely haven off Lesser Square and relaxed in a comfy reclining chair while getting a 30-minute foot massage. Yes, an indulgence I know, but it was so wonderful. I look forward to getting many massages in India!

Around 3:30, I wandered into a cafe off Wencesles Square for a pit stop. To my surprise, it was a cinema. I asked my waiter if there was any English speaking movies playing and he said yes. It happened to be “old school” week and Alie 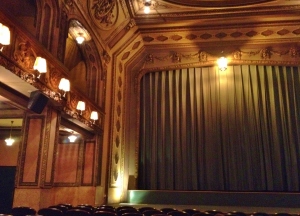 n was playing. It started in 15 minutes so I asked for a ticket. He came back with the requested ticket and said, it’s on the house – enjoy Prague!! Sweet! So I went inside this gorgeous old theatre and watched a movie from my teens – Alien! To be honest, it wasn’t that dated at all and I thoroughly enjoyed it, even with no popcorn.

After the movie, I found an Indian restaurant. After ordering, I began reading my book and the couple beside me started up a conversation. They were from London and in Prague celebrating his birthday. Petra and John were great dinner companions and afterwards, they invited me to the Irish Pub down the street to meet the boys from Essex they had met on the plane. Well, I had nothing to do so I accepted. We walked into what I assume is a traditional Irish Pub (I haven’t been to one so I don’t know), and I met the boys from Essex. It was a smoking, drinking, sport bar with several “tellies” blasting out the football games. It was nothing if not lively! I had a great conversation with the father of one of the boys about Elvis. He was a big fan and when I told him I was originally from Memphis, we talked about Graceland, Tupelo, rock-n-roll and the death vigil. He was a hoot! I finally left as I had had enough of the smoke in the bar. Jeez, it was awful the next morning. Euwwwww! But it was a fun way to end my stay in Prague. 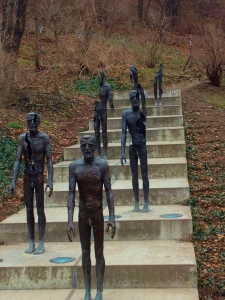 The next morning, I packed up, ate breakfast and checked out of the hotel. I walked towards the subway and began my journey back to the airport and back to Koln with only a few days to wash clothes, pack and head to India. I’m so excited about my upcoming trip. I think it’s going to be transformational, one way or another.

I hope your day is transformational dear friends. Namaste. 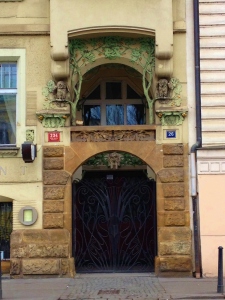