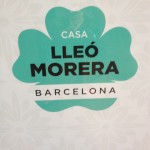 Let’s continue our journey through Barcelona today as we tour Casa Lleo Morera, the Barcelona Cathedral, the Palau de la Musica and Palau Guell! It’s now Wednesday and we three girls decided to divide and conquer. We all wanted to see different things, so after breakfast of chia pudding we split up and went separate ways deciding to meet near the port for dinner at 6 PM.

My first stop was Casa Lleo Morera. It wasn’t exactly a planned stop but I’m sure glad I 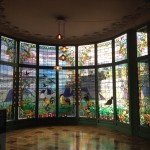 wandered in! It’s one of the three unique buildings that make up the Block of Discord along Passeig de Gracia. The Block of Discord gets its name from the competition between the well-to-do neighbors who were literally competing to have the best building on the block. Each neighbor and their personal architect was trying to outdo the others! Th 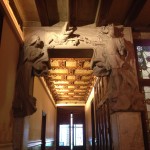 e Casa Lleo Morera was created by architect Lluis Domenech i Montaner who also designed the Palau de la Musica and Hospital Sant Pau. Like Gaudi, his designs are inspired by nature and organic motifs. This particular home had the largest balcony overlooking the prominent Passeig de Gracia and was the envy of many homeowners. The interior was grandiose and featured elements from the mulberry bush and also lion motifs from the family crest. It was a most interesting tour and our guide was very informative. He also took us down the street to another house that was closed for renovation to allow us to see the lobby. Very nice! 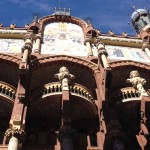 , not to be confused with the Opera House. The Palau is a building devoted to all types of music and boasts 300 different shows per year! It was built solely on donations from the people and anyone was welcome. In other words, it was not just for the rich people. Tours are timed, so I purchased my English speaking 1 PM tour and proceeded to the Cathedral for a quick audio tour since I had over an hour to kill. 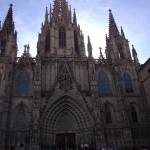 The Cathedral of the Holy Cross and Saint Eulalia is the church of Barcelona’s Archbishop. The site where the church stands was once the location of a Roman temple, a mosque and later a 1st century church that was destroyed by the Moors. The Gothic style church is beautiful and the adjoining cloisters were peaceful and lovely containing water elements, swans and palm trees – an oasis in the crowded area. I took the elevator to the rooftop and enjoyed the sunshine and wonderful views of the city. At noon, the carillon began and I was swept away with the 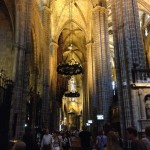 melodic sounds. Beautiful bonus! I wandered again through the cathedral and the crypt before heading back over to the Palau for my tour.

Lluis Domenech i Montaner was the architect of the Palau and like Casa Lleo, his design is grandiose and spectacular. It was like being inside a music box! The building is completely surrounded by other buildings and is boxed in with little sunlight, but surprisingly, he was able to use natural light to open up the main hall by adding a spectacular stained glass ceiling in the middle as well as sta

ined glass windows very high up on the side walls to bring in the light. In the auditorium every possible modernism technique has been employed. Every surface is adorned with features like stained glass, sculptures, mosaics and murals. On the wall at the back of the stage is Muses del Palau, terracotta female figures holding musical instruments that represent every type of musical origin. The proscenium arch that frames the stage is a flurry of activity with Josep Clave, the Orfeo director coming out of the “Flowers of May” on one side and the composer Beethoven looking through Wagner’s Valkyries on the other. Its cast with marble and concrete statues of life-size horses. The hall is extremely impressive as is the line up of music throughout the year! 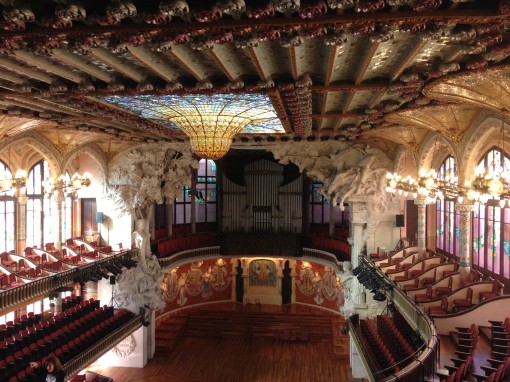 After leaving, I realized I was starving since it was almost 2:30 and I hadn’t eaten since breakfast. I found a cafe just outside, Alzur Cafe, and ordered their Mediterranean salad. It was wonderful! Full of fresh avocado, roasted squash, olives, capers, nuts and greens. Just what I needed before heading to the Palau Guell, the home of the very wealthy Guell family designed by Antoni Gaudi.

Guell Palace is a mansion located in El Raval; it is a UNESCO site as part of the great works by artist and architect Antoni Gaudi. Eusebi Guell was a wealthy industrialist and Gaudi’s patron. He commissioned Gaudi to design the mansion in 1888, and the house became Guell’s family home. Later the building was used by the police during the Civil War for torturing political prisoners. 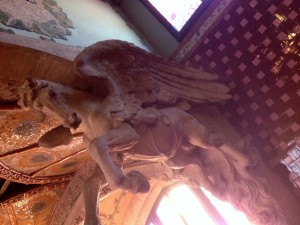 On the front of the building are high parabolic arched entrances with iron gates adorned with intricate patterns in the metal work. Carriages could enter through the archways into an inner courtyard or hall, from here animals were taken down into the basement and people went up into the living area of the house. The main hall soars three stories high with arches and a cupola in the middle, creating the feel of a Gothic cathedral. Inside the building the main focus is on the central room which was used to receive visitors. High upon the walls are small windows where the owners of the house could secretly look in at their guests. In the main room there are gaps in the top of the wall where lanterns were hung. The house has a magnificent music room with an organ which is played during visiting hours. In true Gaudi style there are Gothic, Islamic and art-nouveau influences in the decoration and architecture. The house is rich with color, angles, stained glass, polished plain stone, parabolic arches, mosaics, murals and domes. 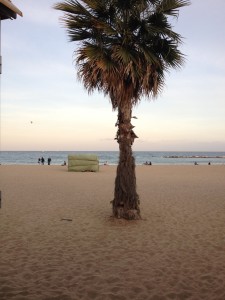 After leaving, I made my way towards the Port of Barcelona to meet Deb at the Columbus monument. We walked down the boardwalk towards the beaches to find a spot to eat. It was after 6 PM and the sun was beginning to sink towards the ocean so we found a table at a beach cafe that served fresh juices and food! I ordered a fresh squeezed antioxidant juice and the gazpacho with bread and tomatoes, a Catalan special! After dinner, we walked towards the bus stop and ran across a massage place still open. What the heck! We deserve it!! So we booked a 30 min massage. My neck and shoulders were aching from carrying bags and purses and sleeping on the couch, so I welcomed a good hard neck and shoulder massage. I was not disappointed! The guy did a miraculous job and after 30 minutes, I was limp with relief. We slowly made our way back to Casa Gracia on the bus half asleep. I did manage to make it over to the lounge area to hear the free music until a little after 10, and then I made my way to our room for much needed sleep! 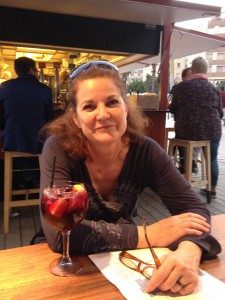 It was a full day of walking and seeing so many unbelievable sites, and then a massage on top of that! I was exhausted and happy. Check back tomorrow for more of my Barcelona adventure! Click on Photos from the menu up top to see all the pix.