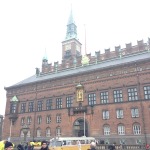 After a long and interesting day, Tam Tam and I are finally in Copenhagen! We arrived late Friday night and we return to Berlin Sunday afternoon, so we didn’t have much time to visit this beautiful city. I had done a little research and rather than track down the small statue of the Little Mermaid, my goal was to check out Freetown Christinia. Tam needed to finish her search for treasures to take back to family, so we decided to hit the shopping streets after breakfast so she could complete her shopping, and then we would go to Freetown in the afternoon for lunch and explore this unique area. After that, we would enjoy a nice Valentine’s Day dinner together!

After a huge breakfast at our hotel, we started walking towards the shopping area with its pedestrian streets. We passed Trivoli Gardens, the large amusement park and garden area, but it was closed 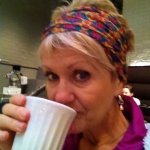 until April. Tam recalled her visit there when she was 10 years old and how much fun she had. We walked past the canals lined with museums and beautiful buildings until we arrived at the city center. While Tam 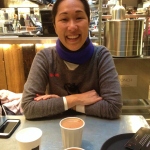 shopped for jooray and other gifts, I explored several churches in the area. I always love going in churches. Everything is quiet and peaceful and I love the stained glass! We stopped at a cafe called Hotel Chocolat and had the very BEST hot chocolate I’ve ever had. Even my soy version was thick and creamy and divine!! WOW! It was memorable and if you are ever in Copenhagen, definitely go there!

After our hot chocolate, we continued our walk through the city and came across the “Happy Wall!” It was a long barrier that enclosed a huge construction site, but the city uses the wall as an interactive art project. The wall is actually all these small 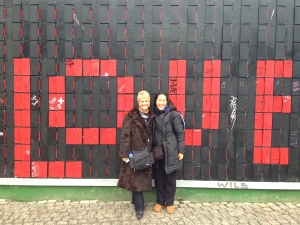 tiles that flip from a black side to a colored side. The colors ranged from blue to red to yellow to green to orange and you can “draw” or write on the wall by flipping the tile. Since it was Valentine’s Day, Tam and I spelled out LOVE in red on the black wall. It was a huge hit and couples started coming over asking if we would take their picture. It was very sweet and we were proud of our work. But like all things, is was short lived. Another couple came over as soon as we began to move on and created their own artwork, I [heart] U. I guess it’s true that art work is never revered until the artist is dead. No respect! HA! 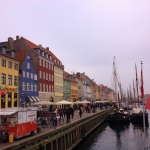 ed strolling and came upon Nyhavn street. It is along the harbor and lined with different color buildings and sailboats. It’s a great place in the summer to sit outside and have a coffee and watch the tourists go by; but today, we walked along looking in shop windows and listening to the street musicians.

Afterwards, we headed toward Christiania. It’s a self-proclaimed autonomous neighborhood of about 850 residents, covering 84 acres in the borough of Christianshavn. The authorities in Copenhagen regard Christiania as a large commune, but the area has a unique status in that it is regulated by a special law, the Christiania Law of 1989, which transfers parts of the supervision of the area from the municipality of Copenhagen to the state. It was closed by residents in April 2011, while discussions 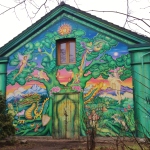 continued with the Danish government as to its future, but is now open again. It took a while to find  the entrance but once we were on the right path, we just followed all the hippies! 🙂

Christiania has been a source of controversy since its creation in a squatted military area in 1971. Its cannabis trade was tolerated by authorities until 2004. Since then, measures for normalizing the legal status of the community have led to conflicts, police raids and negotiations which are ongoing. The mission of Christiania is stated as follows:

The objective of Christiania is to create a self-governing society whereby each and every individual holds themselves responsible over the wellbeing of the entire community. Our society is to be economically self-sustaining and, as such, our aspiration is to be steadfast in our conviction that psychological and physical destitution can be averted.

Christiania is considered to be the fourth largest tourist attractions in Copenhagen; and abroad it is a well-known “brand” for 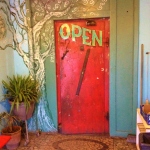 the supposedly progressive and liberated Danish lifestyle. The people in Christiania have developed their own set of rules, independent of the Danish government. The rules forbid stealing, violence, guns, knives, bulletproof vests, hard drugs and bikers’ colors. Famous for its main drag, known as Pusher Street, where hash and skunk weed were sold openly from permanent stands until 2004, it nevertheless does have rules forbidding ‘hard drugs’, such as cocaine, amphetamine, ecstasy and heroin. The hash commerce is controversial, but since the rules require a consensus they cannot be removed unless everybody agrees. Legalization of cannabis is one of the ideas of many of the citizens in Christiania. 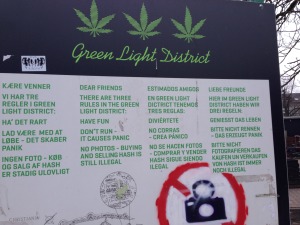 There are signs posted as you enter the “Green List District” that state no photos are allowed. Most of the shacks that trade in hash are veiled with fabric or other covering so you can’t really see anything that is going on, but you can sure smell it! At one point, Tam and I stopped at a large oil barrel with a fire lit to warm our hands and we were politely told to move on, that we could not stand there. We were so white, I don’t think we could have bought anything on a bet. We stood OUT like Danes in the Delta!!!

Around 2 PM, we found a spot to eat lunch. It was a family-style buffet with simple, organic, home-cooked vegan food. They style was very laid back as you might imagine and the food was delish!! We sat and watched all t

he unique people come and go through its doors. After lunch we walked around the hood a bit more exploring some of the homes. It’s truly a unique area and the residents were a lot older than I imagined. They are truly hippies from the 70’s who grew up there and are now raising their grandchildren there. It’s certainly not a place for everyone, but it was certainly worth an afternoon’s visit!

We walked back towards the center of town and found an outdoor cafe on one of the main squares. A man was playing the keyboard, kids were playing and we were bundled under blankets and the outdoor heat lamp as we drank our coffee and listened to the music. It was a great way to end our Valentine’s day in Copenhagen. 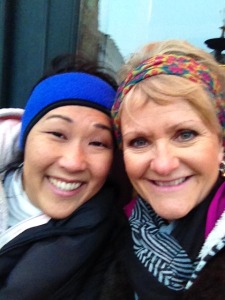 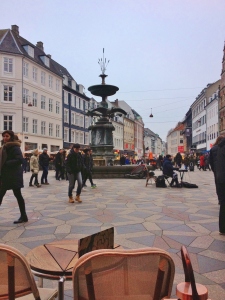 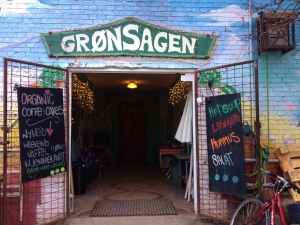 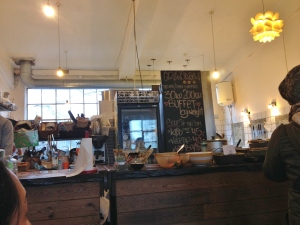 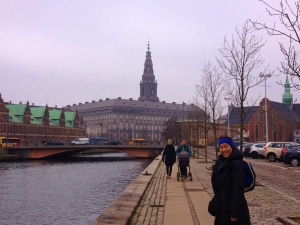 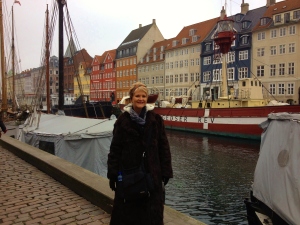 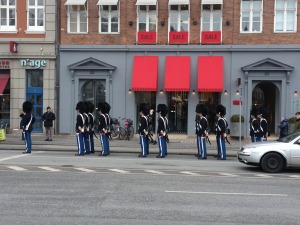