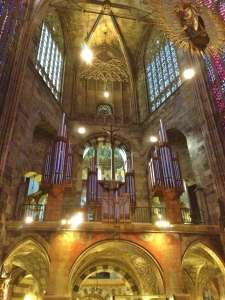 Last week, I went with my German friend Maggie to the city of Aachen about 40 minutes drive outside of Koln. She has been telling me about Aachen for some time and suggested several times that we go together. Since my time in Germany is coming to a quick end, we decided to make a quick trip to see the city of Charlemagne. Aachen is a city that lives and breathes Europe. It is practically Europe in miniature. Aachen, on the border with Belgium and the Netherlands, has encapsulated the spirit, values and ideals of Europe since the days of Charlemagne. Indeed the Charlemagne Prize for services to European unity has been awarded at Aachen’s town hall since 1950.

Aachen was a favored residence of Charlemagne, and later the place of coronation of the German kings, which is where it gained the reference as the “watering-place of kings.” Aachen is the westernmost city of Germany, located along i 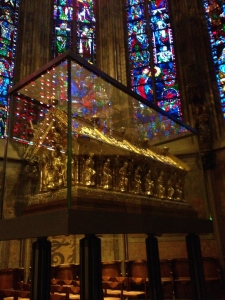 ts borders with Belgium and the Netherlands, and it is home to the Charlemagne Center/Museum as well as the Aachen Cathedral.

The cathedral was erected on the orders of Charlemagne in AD 796 and was, on completion, the largest cathedral north of the Alps. On his death, Charlemagne’s remains were interred in the cathedral and can be seen there to this day in a gold coffin at the alter. The cathedral was extended several times in later ages, turning it into a curious and unique mixture of building styles. For 600 years, from 936 to 1531, Aachen Cathedral was the church of coronation for 30 German kings and 12 queens. The church built by Charlemagne is still the main attraction of the city. In addition to holding the remains of its founder, it became the burial place of his successor Otto III. In the upper chamber of the gallery, Charlemagne’s marble throne is housed. Aachen Cathedral has been designated as a UNESCO World Heritage Site.

The city hall, dated from 1330, lies between two central places, the Markt (market place) and the Katschhof (between city hall and cathedral). The coronation hall is on the first floor of the building. Inside you can find five frescoes by the Aachen artist Alfred Rethel that show legendary scenes from the life of Charlemagne, as well as Charlemagne’s signature. It also contains the hall of the emperors, along with replicas of the imperial crown jewels.

In addition to being Charlemagne’s winter hangout, Aachen is also famous for its gingerbread! Tales of emperors, an almighty blaze and even the devil surround this baked treat. One thing’s for certain. Printen is a gingerbread that can be hard or soft depending on how much honey is in the recipe. Whatever the texture, it always tastes heavenly, especially when topped with nuts, almonds or cherries. Printen came into be 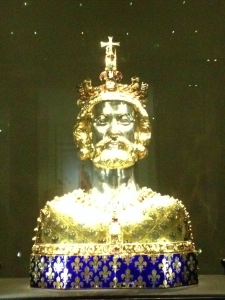 ing when Napoleon cut mainland Europe off from imported sugar supplies. The bakers sweetened the dough with sugar beet syrup, giving Aachen Printen its distinctive flavor. Maggie was sweet enough to buy us a sampler pack of Printen to try. We had plain, chocolate covered and sugar coated – all vegan too! It was yums!!

Afterwards, we went through the museum and the City Hall before heading back to Koln. Aachen is a lovely town and I wish we had more time to visit. Ah well, another time I suppose. It’s been there for centuries, so I reckon it’ll be there whenever I come back.

Enjoy your day and make it a historical one – one for the history books!! 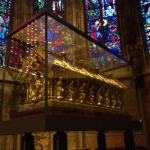 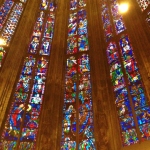 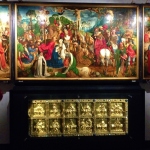 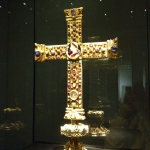 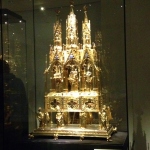 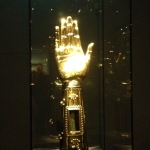