OK, I promise this is my last post on London. I’ll manage to get it all in one way or another! 🙂 But there’s just so much to talk about!

Sunday morning was a bit overcast, not raining, at least not yet. The weather up until this point has been great, spectacular for London with clear skies and no wind. We decided it was not quite a museum day yet and so after breakfast we headed to the Globe Theater. The “new” Globe is an authentic reproduction of Shakespe 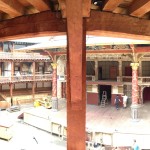 are’s original Globe theater located on the Thames just a short distance from where the original theater once stood. All the theaters in Shakespeare’s day were on this side of the river, away from the good Christian, morally upstanding folks on the other side of the river. Theaters, brothels, psychics, and other entertainment venues were all located on the naughty side of the river. I think I would have lived in the naughty side. The new Globe opened in 1997 after many years of fundraising, on again off again construction, political hurdles and plain bad luck. Just like the original the globe is an open-air theater with covered gallery seating surrounding the stage and the open area ground floor is for standing only. Shakespeare affectionately called these patrons Groundlings. Since it is an outdoor theater the season runs from April to mid-October when the weather starts to turn bad. Our visit coincided with the final production of the season – A Comedy of Errors. We had already checked online for tickets but the show was sold out 🙁

We signed up for the 11:30 AM tour of the theater and went to the box office to ask about any available tickets. We were told to 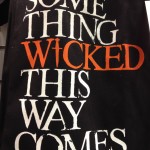 check back closer to performance, around 3 PM. We went back to the museum and started our tour. Our guide was enthusiastic and informative offering visitors a lot of history about Shakespeare, the theater and the reconstruction. After our tour, we walked through the museum and galleries. All of the sets and costumes are made using only materials that were available in the 17th century. No modern materials, special effects, lighting, etc are used in any of the current productions!  After our Globe tour, we went next door to the Tate Modern museum and breezed through a few floors before heading back to the box office. We went back at 3 PM to check on tickets and scored two Groundling tickets for only 5 pounds each!!!! We ran off to grab some food before the show and store our bags so we wouldn’t have to hold them while standing for 2+ hours.

We stood in the drizzle for almost three hours but the entire experience was worth it! We were able to see a very authentic production of one of Shakespeare’s most enduring comedies in a theater that few others will experience. The show was funny and even though I couldn’t understand them at times, I enjoyed the production.

Afterwards, we went to Soho for dinner at Wildwood Grill. We were cold and wet from standing in the rain, and so we enjoyed a small cozy supper with warm soup while we waited for the rain to stop. After dinner, I went back to the hotel. I had hit a wall and my feet were tired from standing and walking so much. Kevin went off to explore Soho a bit more. Good night sweet prince… 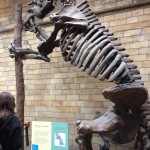 Next morning, was definitely a museum day! The rain finally caught up with us, so we hopped on the Tube and headed to the Natural History Museum. I always enjoy natural history museums and love lingering at each exhibit relearning what I should have learned in school! We spent the entire day at the museum and I loved every minute of it, but apparently everyone else in the city decided it was museum day as well so getting on the Tube and back to our hotel took much longer than we anticipated!

Rather than return to the hotel, we headed straight to the Prince of Wales Theater to see Book of Mormon. We grabbed a quick dinner at Pizza Express (best salad I had in London) and then straight to our seats! The show was sold out and the venue was small so being late was not an option. The show was spectacular and wrong, wrong, wrong on so many levels. I’m not sure how they avoid being sued by the Latter Day Saints actually! The couple in front of us left during the second number. Of course, the second number is F*%$ You God, so I can see why. I’m surprised more people didn’t leave or maybe they did and I just didn’t see them. It’s outrageously funny, but I can see where folks would be offended, greatly offended. It’s not for the faint for sure! But I enjoyed the hell out of it! I may be a Groundling but I’m no weakling! 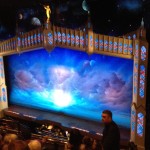 After the show, we sent to Soho and the gay bars. The first bar we went to was gay friendly by not really a gay bar, at least not what I’m used to. We met some nice folks there and talked for a little bit. The second place we went, I was the only female in the bar. We were definitely in a gay bar now! One guy asked me, “honey, do you know where you are?” I replied, of course, I’m in a bar with a huge crowd of fabulous, good looking men and I’m the only female that hasn’t had an operation! He laughed loudly and said, “honey, you come stand next to me. I think I love you!”  His name was Harris and he introduced us to all his friends and we made some new ones. The bar closed at 12 AM so we went to the “Man Bar” since it stayed open until 3 AM. There we met Andy and Demetrias who were welcoming and talkative. We finally said goodbye around 2 AM and headed back to the hotel. It was a very fun evening with a ton of laughs and new friends.

And now, it’s Tuesday and time to pack up and exit the building. We had to check out by noon, so we went for brunch and made good use of their free wifi to check our flights and email. We finally said our goodbyes to each other and headed to our respective airports. I always hate the last day because you can’t really do anything meaningful since you have to check out and you have luggage and you have a deadline at the airport that you can’t miss. It’s too stressful to enjoy what time you have left in the city. So we said a sad goodbye to London. I was grateful for the good weather we enjoyed, all the 2 for 1 dis 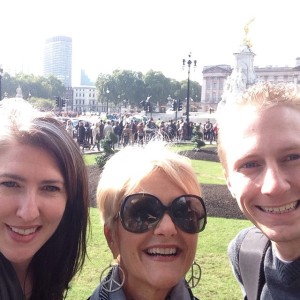 counts we were able to use, all the fabulous shows we saw, and of course all the wonderfully fun and helpful people we met. I have to say, Londoners are extremely friendly, helpful, and thoughtful towards visitors. I wish all cities were like that!

I’m also grateful for my friend Kevin and Julia who shared the adventure with me. I don’t mind traveling solo, but I much prefer to have the company of dear friends to share the fun with. Having a buddy just makes everything more fun!

I hope you have a fun day with your best buddy by your side. Be sure to tell them how grateful you are to have them there and how special they are!! Cheerio!

One thought on “Lovin’ London Part 3”